I co-organise the BrisPHP Meetup and at the start of every meetup I give a quick talk on recent news and other interesting things that have been happening in the PHP world. Recently, PHP 7.4 features have been finalised and development of PHP 8.0 continues.

There have been a couple of RFC’s passed recently which change the way any future RFCs are voted on.

PHP 7.4 is now in feature freeze with Beta 3 being released last week. Now it will go through a handful of release candidates before it’s final release date of November 28! There is actually quite a lot being released PHP 7.4, I’ve covered some of them my Q1 and Q2 posts so I’ll just cover the new ones here. Take a look at this very good overview on stitcher.io for more details.

You can add an underscore (_) anywhere you like in a numeric literal to help increase readability. It applies to all supported numeric literal notations, see the RFC for more info.

I didn’t know this but apparently you can’t throw exception in __toString(). Until now. This RFC points out that exceptions aren’t allowed in __toString() because string conversions are performed in many places that aren’t equipped to handle exceptions. However recoverable errors can still be thrown when converting un-convertable variables so there’s really no reason to prevent exceptions as well.

Something else I recently learnt is that depending on how you create a DateTime, PHP might not be able to correctly calculate additions and subtractions across Daylight Saving Time transitions. And even if you do use the “correct” way, the result is still sometimes wrong because the edge case was not sufficiently unit tested. However, moving forward - if you create your dates the “correct” way, then all calculations will be correct.

Some databases, namely PostgreSQL use the question mark character in operators. However it’s currently impossible to use thes operators with PDO because all ? are treatedd as parameter placeholder. This RFC makes it possible to escape question marks by using a ??, which passes a single question mark to database:

Will execute the following query:

Since ?? is not valid syntax in PDO, there shouldn’t be any BC breaks. However, if you have defined ?? as a custom operator in your database, you will need to pass ???? though PDO in order to use it.

For a while now, you’ve been able to use the spread operator (...) to unpack an array and pass it’s values into a function:

Now you can do that inside an array, as a better alternative to array_merge:

See the RFC for details.

There has been a big list of deprecations in 7.4, allowing us to prepare for a lot of cruft being removed in 8.0. In fact, there is an RFC which includes 14 separate deprecations, which were all passed. These were all relatively undocumented or incorrect usage of functions, see the linked RFC for details. However there are a few separate RFCs to deprecate specific functionalty, which I’ll list below.

Have you even seen a ternary this ungoodly?

If you have these in your codebase, they are “almost certainly bugs” according this RFC. This is because in PHP this is left-associative instead of right-associative like most other programming languages. Take a look at the following example:

Apparently you can use curly braces to access elements within an array, or characters in a string. This has been deprecated in 7.4 since it’s largely undocumented and has reduced functionality from normal array syntax. Here’s some examples taken from the RFC.

In my Q2 post I covered most of the accepted features for 8.0. I did mention that arrow functions were coming it 8.0, but they were actually accepted for 7.4, so we get much sooner! There has also been one more accepted RFC for 8.0 and is to always generate fatal errors for incompatible method signatures. Currently, if you implement a method that has an incompatible method signature to the interface or abstract class it’s declared in, you get a fatal error. However, if the method was declared in a parent class and you’re overriding it, then you only get a warning. These will all throw fatal errors as of 8.0.

The May edition of PHP Versions Stats has been released by Packagist. When someone does a composer install, Composer tells packagist.org what PHP version is being run. This gives us a good understanding of what versions are in use, but it skews the data by ignoring all the projects that aren’t using Composer (eg. a lot of WordPress sites). 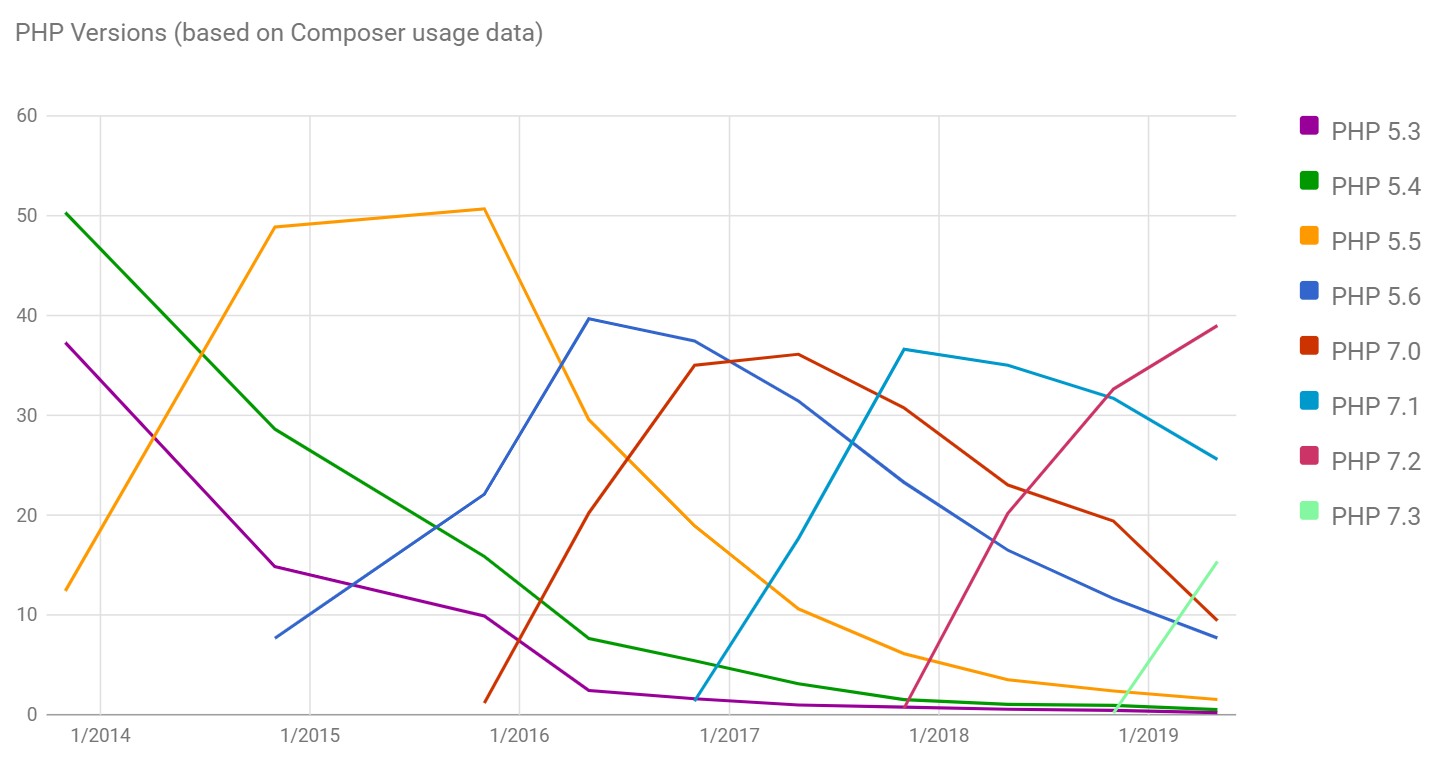 Tomas Votruba tracks trends in PHP framework installations by pulling data from the Packagist API. It really is fascinating to see just how many downloads each framework gets. 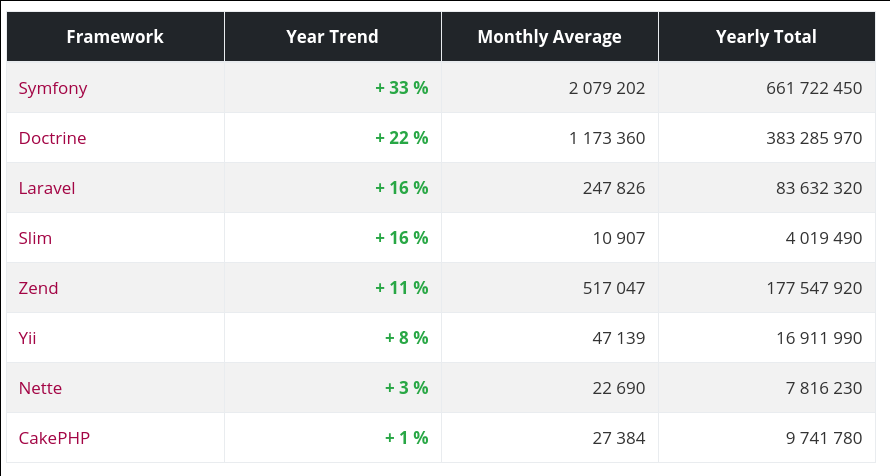 JetBrains ran a developer ecosystem survey this year and they found some fascinating data about PHP:

ReactPHP has release v1.0.0 as an LTS version with 24 months support. This is the first stable release of ReactPHP since it was created 7 years ago.

SymfonyCloud moved from Early Access to General Availability. This provides a “batteries included” platform to host your Symfony applications.

It’s been a big quarter for Laravel: